Sadly, it’s been far too long since Jaguar last raced at the Le Mans 24 hour and with little prospect of that changing, we decided we needed an excuse to go. With the regulation changes coming in 2020 we felt 2019 was the year to go and wave the Swallows flag, literally. Jaguar may not have raced at the Circuit La Sarthe for many years however there is still a strong bond, love and affinity for Jaguar owners and enthusiasts with the old place. Our elected representatives for the 87th running were Swallows owner Gary Robinson, also known as Monsieur Grand Fromage pulling rank, and newly appointed consultant Colin Porter because he’s got the camping gear and knows how to keep beer cold for three days without a fridge. The vehicle of choice for the road trip needed to embrace all the true Jaguar qualities grace, space and pace. Grace because we like to travel in style, space, somewhere for the beer and tents, pace to keep along with the exotic rides heading south. How about then an XJ Supersport. Five litres of supercharged pulling power with more than enough room and plenty of style.

The annual pilgrimage for many British racing fans begins the minute that you leave the ferry and join the Autoroute south and the car spotting begins. With a comfortable ride and plenty to look at the kilometres flew by and we were soon on the outskirts of Le Mans and looking for the signs to our campsite located within the circuit. Houx Annex is close to the action and the main temporary circuit village. Pitch found, tents thrown up, literally in Gary’s case, “it’s a pop-up tent, oh yeah” we headed for the circuit and the crescendo of noise coming from the cars out in qualifying. Beer in hand we took in the sights and sounds and the festival atmosphere. Watching the LMP’s & GT’s exiting the pit lane they are deafening, the noise ricocheting of the huge grandstands. After watching the night-time qualifying and almost inevitably the Toyota’s taking the front row, we retied to the large bar where we were entertained by an array of bands and some bad dancing until well past midnight. On returning to the campsite an invite comes our way the Grand Fromage blagging it to join a party going on with a large group of Dutch and Belgians, this typical of the friendly and generous nature of Le Mans and we were welcomed and treated as if we were long time friends.

Friday was unsurprisingly a bit of a rehab day, but we did eventually head into Le Mans town on a hideously overcrowded and very hot tram running from the circuit to the centre to watch the driver parade. In truth we probably wished we hadn’t as it was a bit of an anti-climax, however a good steak and local fruit beer which tasted suspiciously like lager and black soon made up for it. A unanimous vote for an early night to be fit and ready for race day was passed with no objections, so we hit the sack in our luxury accommodation.

Race day, and the camp stove manages to offer up almost a full English, well at least sausage, bacon & eggs and a proper mug of tea. With the race not beginning until three o’clock the mornings entertainment is offered by a strong gust of wind lifting some happy campers tent high into the sky. Watching this soar into the air and dance around like a kite provided amusement for several minutes for the entire campsite and endless social media footage. The unlucky camper finally recovered the tent and was roundly applauded by the whole site as he embarrassingly returned to his pitch.

As the anticipation of the race grew, we headed for a viewing spot at Tetra Rouge the last corner before the Mulsanne straight, where we were treated to a wonderful view of the Patrouille Acrobatique de France (the French Red Arrows) who flew over just prior to the start of the race. With the race underway over sixty cars came thundering through it was a true feast for all the senses. British driver Mike Conway was the early leader setting a furious pace and soon lapping the eight-mile circuit in a record 3.17 in the number seven Toyota. The joy of watching racing at Le Mans is the variety of viewing places each offering a different perspective. So continually walking whilst listening to radio Le Mans kept us abreast of the action.

With daytime falling away and dusk descending we headed to the Porsche Curves and a wonderful night-time spectacle with glowing brake discs and illuminated cars. A long hike back passed the fairground took us back to the grandstand and start-finish straight where we could watch the cars enter the pit lane. Finally fatigue set in and we headed to bed at 2am.

We woke to find that the number seven Toyota was still leading and the sister car second but around three minutes behind. After walking to the wrong bus stop, we eventually found the bus to take us to the end of the Mulsanne straight three miles away where we located ourselves to watching the closing hours of the race. Mulsanne corner is a tight right-hand bend where the cars must decelerate from over two hundred miles per hour down to around sixty. In the final hour the lead changed hands when the number seven Toyota pitted with a warning of a tyre deflating, only for the pit crew to change the wrong tyre forcing car to pit again on the following lap and handing victory to the sister car the number eight Toyota, a somewhat cruel ending for the seven car which came home second.

After the race the public road parts of the circuit are reopened to the public and we were able to walk it all the way from Mulsanne to Arnarge and get a wonderful perspective of the track.

Le Mans is a big festival, 250,000 petrolheads having party, the campsites are full people who have been planning their trip since the previous year in some detail. Fully functioning kitchens, large screen TV’s, PA systems, laser light shows, fireworks, pool tables, Route Master London buses, portable bars and candelabras are not unusual sights. The thinking caps are already on for next year, what can we bring to the party? 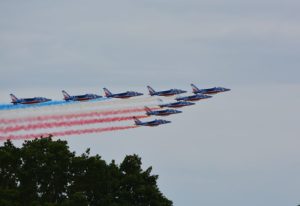 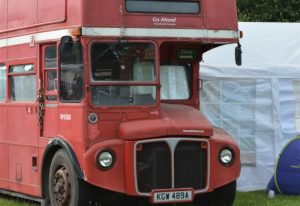 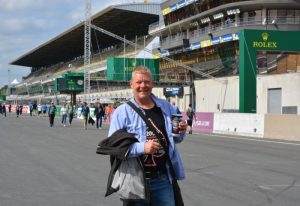 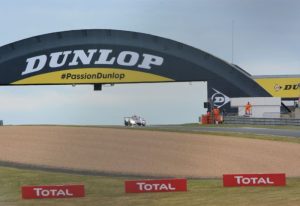