A combination of a heavy workload and Friday traffic chaos meant a late evening arrival at Thruxton in Hampshire for the most ‘local’ round of the JEC Racing Saloon & GT Championship. With the gearbox finally sorted on Tom’s XJR after syncro issues at Anglesey, the mood in the Swallows camp was quietly optimistic. After all, Thruxton is the UK’s fastest circuit which suits the car, and this was where Tom had the best result of the season last year.

Glorious early Autumn sunshine greeted us for qualifying. Getting out first gave Tom a clear track and by lap two he’d laid down a time which would prove good enough for pole. The XJR developed a misfire on lap three and meant Tom returning to the pits on lap four and yet another alternator fault as we had experienced at Silverstone. A quick dash for Gary and Jack to the nearest Euro Car Parts in Basingstoke to collect a new alternator didn’t entirely solve the problem as the new alternator came with a fault also. Master Tech John Odam is always our go to man and soon he’d made one good alternator out of two faulty ones and we were back in the game with over an hour to spare.

Strangely pole isn’t always an advantage at Thruxton as second on the grid can offer more grip and a better line into Allards at the end of the straight. So it proved when Colin Philpott got a marginally better start putting Tom second through the first corner. With the XJR on song Tom was looking to take the lead going into Church corner, but perhaps with the tyres not quite up to temperature he span fortunately missing the on coming cars and dropping him back to ninth. Philpott was able to take advantage and began to open a healthy lead from Michael Holt’s X300 in second and Richard Coppock in the XJS third.

Tom had the bit between his teeth and determined to make up lost ground set a fastest lap of the race and had caught Holt by lap five and set about passing the Yorkshireman using the power of the XJR to find his way past. Behind Holt newcomer Michael Seabourne a surprise P4 in qualifying was battling championship leader Chris Boon’s XK8 for Class B and in the mix with Coppock Junior and Senior in the XJS’s and being caught by Tom Lenthall in the Class C XJS.

Lap elven and Tom’s brilliant charge back through the field saw him close within three tenths of a second of leader Philpott, the impossible now seemed possible but the Powebell man’s XJS is a strong car and digging deep he opened out the margin to a second holding on to deny Tom his first championship win. Holt was a fine third and winning Class C, new boy Seabourne with a great debut sixth overall and winner of Class B and drive of the day with Simon Dunford heading Class A in the XJS.

Heavy overnight thunderstorms left the track with standing water, but by the time the Jags were due out for the first race of the day some drying lines were emerging in places from the qualifying rounds of the CSCC series. Combined with on and off drizzle it made for very tricky conditions as the lights went out. Tom got good traction from second on the grid and took the lead into Allards for the first time, while Philpott and Holt were battling for second behind, Holt coming out on top, followed by the Coppocks, Seabourne and Lenthall.

In conditions that don’t suit the XJR Tom was managing to open a lead, and ahead of the battle for second between Philpott, Holt and Seabourne, the dark-horse Seabourne emerging and claiming second place in the ex-Gail Hill championship winning XJ40, Philpott third and Holt slipping back to fourth.

By the halfway point in the race, ex- kart racer Seabourne was clearly loving the slippery conditions and closed within a second of Tom and the pair were putting on a show twenty-four seconds clear of Philpott in third. Controlling the race from the front Tom continued to hold the finest of margins from Seabourne all the way to the chequered flag to seal a maiden championship victory in front of family and local supporters. Seabourne with a stunning debut weekend collected a second drive of the day trophy and Class B, Philpott hung on for third from a fast charging Tom Lenthall winner of Class C and GT drive of the day with Dean Sewell claiming Class A.

A truly sweet win for Tom in conditions that didn’t suit the car he proved that he can master the wet and put in a mature performance. Cue the celebrations in the Swallows camp.

We look forward to seeing friends at the JEC/Swallows track day at Castle Come on 15th October and for our final outing of the championship season at Donnington Park on 26th & 27th October, we do hope that you will join us. 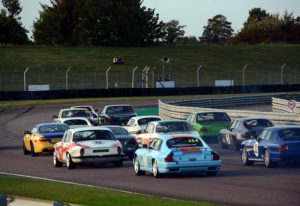 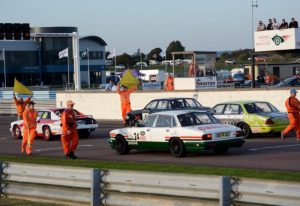 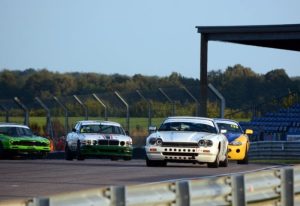 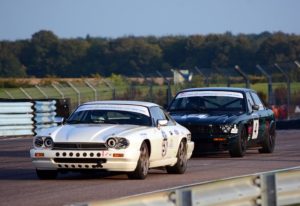 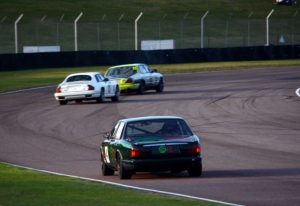 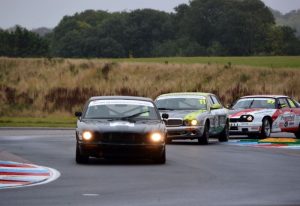 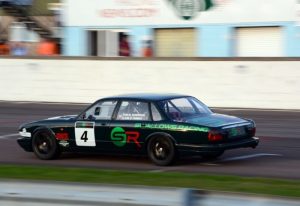 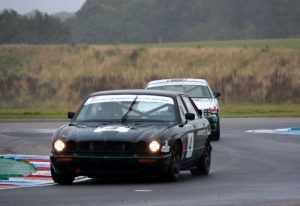 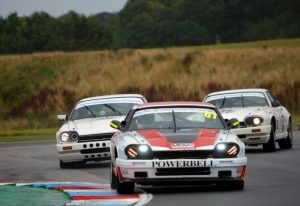 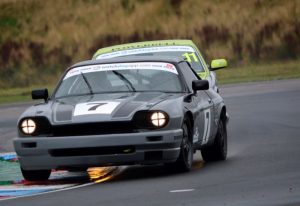