Long cold winter days and late nights are the glamorous reality of motorsport at club level. This season we have gone from running two cars last year to having an involvement in seven or eight cars on this year’s grid. Hopefully this reflects our hard work and success in recent seasons, but it also brings with it extended work and commitment.

Last season Tom in the XJR6 achieved the perfect result in the opening rounds at Silverstone with pole position, two outright and class wins along with the Jaguar Saloon & GT lap record. It is hard to imagine how you can top that, but Tom managed to repeat the feat and eclipsed his own lap record by a full second and therefore currently leads the championship.

We also ran the sister XJR6 car for Matthew Davis last season when he was a complete novice. Matthew is again out with us this season having progressed with time on the track over the winter. Having had a satisfactory qualifying session, he unfortunately span and found the gravel towards the end of race one. Having suffered a DNF he started at the back of the grid in race two but made steady progress to move up and gain several places.

Tom’s younger brother Jack has joined the grid this season in a Class A modified road Jaguar XJ40. Having worked on the car over the winter the cars handling has been greatly improved with a new set of AVO shocks, gaining a massive three seconds a lap when we tested it at Castle Combe recently. Jack showed huge potential over the weekend, in qualifying and both races finding himself mid-pack and mixing it with cars with considerably more power. He achieved an excellent fourth place class finish in both races and lapping within a second of the class winning car.

Over the winter we purchased several ex-championship Jaguars with a view of refreshing and updating them. One of these was an XJ40 that was campaigned by Howard Kirkham in the striking Jaguar F1 metallic green livery. The car having been recommissioned by us was purchased by ex-VW Cup racer Damian Gray. Having not competed for many seasons Damian is getting back up to speed and managed to qualify 30th in a 38-car field and ahead of some more powerful cars. Finishing fourth in Class B and 28th overall in race one he made further progress again holding fourth in class and 25th overall.

Three other cars that we have contributed to with help with set-up, support and parts were also on the grid. Steve Dowell from PVE (Tuning Shed) and our tuning partner has built in less than three months a complete XKR race car immaculately turned out and only finished the night before the race. Unfortunately, the untested factory V8 suffered failure during qualifying and will require further investigation. This was the only low point of the whole weekend.

Friend to the business Andrew Maynard made his racing debut at the age of 60 in a long in the tooth XJ40 as an interim measure while he builds an XJS with our help. Andrew made huge progress over the weekend gaining three seconds per lap between races and we have been delighted to be able to support him through the steep learning experience.

We are also assisting Tom Butterfield with his Class C XJS, Tom having taken a three-year break from Saloon & GT racing due to work and family commitments returned with excellent form. Tom qualified a superb third overall in the Jaguars and finished second in class in both races. As we help Tom to develop the car over the season, we believe we can find the potential within the car for it to challenge for class and possibly outright wins.

Having such a large team requires more support and capacity. We have added to our fleet over the winter a rather large race truck with the capacity to carry four large Jaguars plus all the ancillary equipment, spares, awnings and even our own catering. The great thing about the truck is that it is a very large rolling billboard with the capacity to further promote not only the Swallows Racing brand but the brands that support and sponsor us.

We would like to thank our partners, sponsors, family, and friends who contributed to such a successful weekend at Silverstone, not least; Vision Techniques, AVO, PVE, Tarox, Jaguar Enthusiasts Club (JEC TrackSport), Meguiar’s, Naked Signs and Pipercross.

We look forward to the next rounds at Brands Hatch on 16th & 17th April. 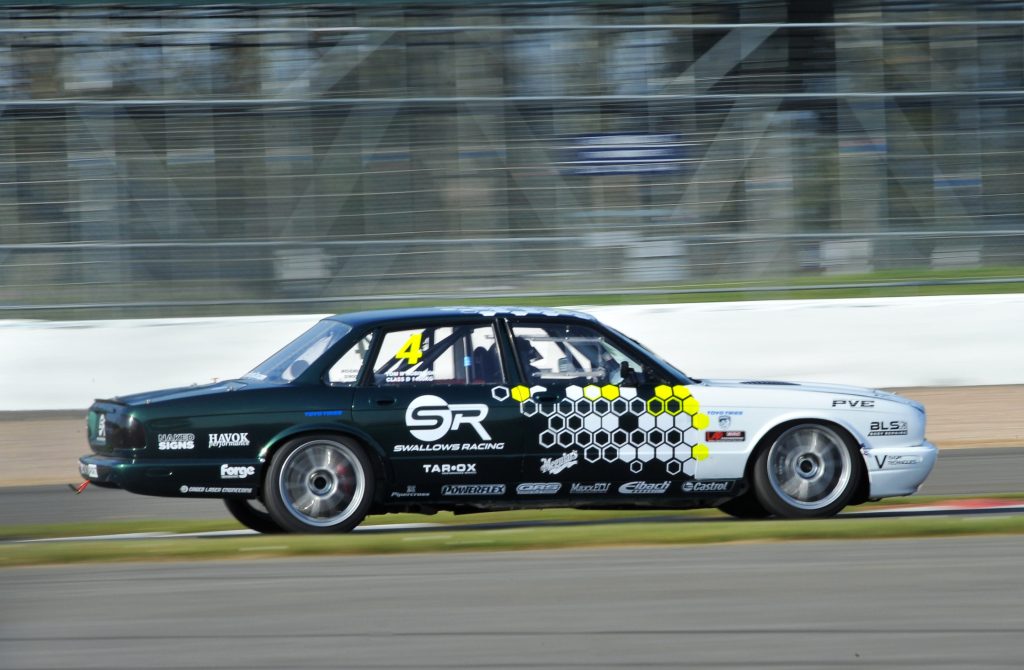