The Brands Hatch Indy circuit is very technical & demanding, requiring maximum concentration to produce best times.With temperatures in the low-mid 30s forecast, the weekend was going to be a challenge to both drivers & cars as track temperatures soared. 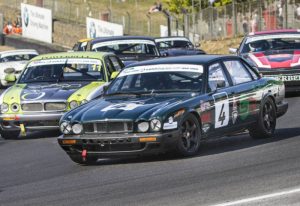 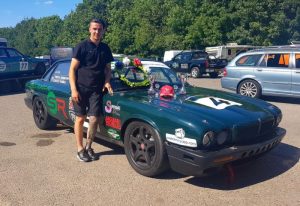 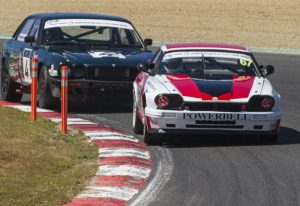 Sometimes for the right reasons and the wrong reasons.

Contrast then the last round of the 2017 season at Brands Hatch, a cold, wet November and a very greasy track and not a friendly environment for our two big XJR’s. Fast forward nine months to this weekend and Brands Hatch was bathed in glorious sunshine and the mercury nudging thirty degrees. Extreme conditions that bring very different challenges, in particular this weekend cooling for the supercharged XJ’s and tyres for all participants.

Brand Hatch is never going to be the ideal circuit for Adam and Tom in these cars with its undulating and curvy nature it’s hard to exploit the power of the supercharged cars, the better handling XJS’s having a distinct advantage on this circuit, however, after an encouraging Friday practice optimism for the weekend was at a reasonable level.

Saturday qualifying saw Jaguar Select driver Adam Powderham in the Swallows Racing prepared XJR quickly up to speed and on the pace and posting impressively consistent lap times, finally qualifying fifth out of twenty-five cars. Meanwhile Tom’s car had developed a misfire before he could post a meaningful time. A quick dash to the pits saw master technician John Odam immediately diagnose and trace the fault to no more than a coil fuse and was able to get Tom back out just in time to post a qualifying lap, putting him on the forth row of the grid immediately behind his teammate Adam in seventh place and only the Pearce/Lenthall XK8 separating them.

With afternoon temperatures soaring into the high twenties round four of the championship got underway with James Ramm leading from pole followed by Colin Philpott. Tom found himself immediately boxed in and was passed by Derek Pearce in the XK8 and fighting Gary Davis in an XJS. Adam was successfully keeping Pearce and Davis at bay and holding fifth and on the tail of Guy Connew in his well-prepared XJ6. Tom managed to power his way past Pearce and was now fighting Davis for sixth place at the end of lap one and it was clear that Tom could be going a fair bit quicker but overtaking on this tight twisty track isn’t easy. Davis was only able to keep Tom at bay on lap three with some ‘elbows out’ defending at Druids, this ended when the number 22 car developed a fault and was retired allowing Tom to take the fight to his teammate Adam who was trying to find a way past Connew who in turn was on the tail of Ian Drage in an XJS so effectively a four-way battle developing for third spot. Lap six saw Connew find his way past Drage and only just over a second separating the four cars. This epic battle continued, the order only changing on lap sixteen when Tom managed to find space to pass his teammate Adam. Finally the chequered flag came down on lap twenty two, James Ramm victorious for, four straight wins this season, followed by Philpott and Connew second and third, Drage fourth, Tom fifth and Adam sixth with only two seconds separating third and sixth place, great tight clean racing. Tom picked up the third-place class D trophy, Adam taking forth in class. A very satisfying result for ‘team Swallows’ with the pre-season hard work finally begining to show dividends, an evening’s little light refreshment was in order.

Saturday lap times dictate grid positions for Sunday so both teammates were delighted to find themselves duly locking out row two of the grid for a boiling hot Sunday race. Tom got a cracking start in the tow of pole sitter James Ramm and comfortably out dragged Philpott in the run to Paddock Hill bend to take second place. Adam was in fourth pursued by Connew and Drage, resuming their previous days encounter. At the end of lap two Tom was a second ahead of Philpott who was followed by Connew who had slipped past Adam into fourth. Lap three saw an aggressive move by Philpott to take second from Tom who applied quick thinking and backed out to prevent a coming together with sensible ‘live to fight another day’ attitude. Little changed in the third, forth and fifth battle until lap sixteen when Connew came upon Lawrence Coppock who he was about to lap, unfortunately the XJ6 tagged Coppocks XJS’s rear end spinning him into the gravel at Paddock Hill and the front offside wing of the XJ6 experiencing major damage. With debris littering the track from Connew’s car the stewards brought out the chequered flag early. Another excellent win for James Ramm, congratulations James, Philpott second and Tom comfortably in third, Adam in forth ahead of the fast-charging Patrick Doyle who had worked his way up from the back of the grid for the drive of the day. Last year’s championship winner Rodney Frost in sixth just holding off the ever-improving Michael Holt.

A wonderful feeling of achievement, Tom’s first podium in only his second season and the best weekends results in the championship. Great effort by Adam, Tom and the crew in the pits. Brands Hatch represented a huge step forward for the Swallows Racing Team at a circuit that doesn’t really suit the cars and in temperatures not favourable for supercharged induction. Next stop Truxton in a months’ time, one the fastest tracks in the country and one that should suit the XJR’s much better, we can’t wait. 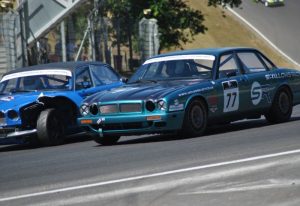 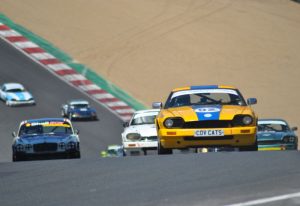 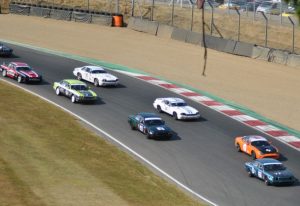 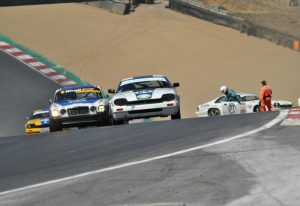 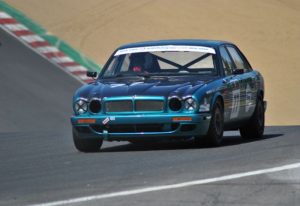 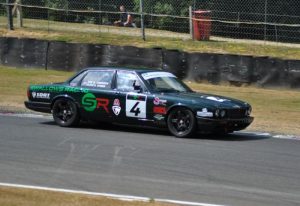 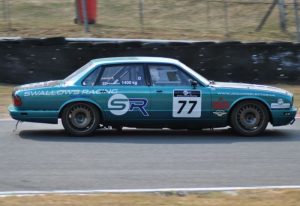 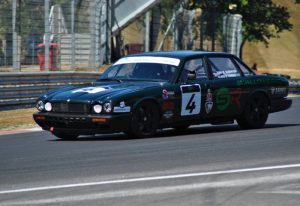 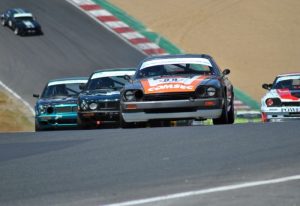