Making Our Own History

Could there be a better way to banish the winter lockdown blues than a sunny spring weekend racing at Silverstone Circuit?

Life at Swallows has remained hectic over the winter months, but that has never stopped us from being able to focus on the start of the racing season. Continually looking for ways where we can gain vital tenths of a second, the development of Tom’s XJR6 has been maintained throughout. Improvements to cooling, handling, and weight reduction were tested and re-tested before heading to the historic home of British motorsport.

A packed Silverstone International paddock greeted us early on Saturday morning, racing alongside the Classic Touring Car Club and the British Automobile Racing Club for the first time. This made for a heady mix of historic touring cars from Pre-66 through to the millennium along with the well-heeled exotic GT’s and Praga prototype’s from Briticar that bring a Le Mans flavour to the racing weekend, petrolhead heaven.

Mid-morning qualifying saw our regular sparing partner in the JEC Saloon & GT Championship James Ramm in his XJS first to post a quick lap. Tom was not far behind but just needed some clear air to get a clean lap. Perseverance eventually paid off and the lap came to him pipping James to pole by just one tenth of a second. Matthew Davis making his racing debut in the sister XJR qualified in an excellent P11.

So, to race one and lights out. The racing Gods then dealt us a cruel blow when Matthew’s car failed to get away and was left stranded on the grid due to a split fuel rail. This unfortunately led to leaking fuel igniting. Matthew was quickly out of the car and the marshals speedily dealt with the fire. Not the debut that Matthew and the Swallows team had wished for, but everyone was safe and the damage to the car was less than first feared.

Having been red flagged the grid was reformed and the Jags thundered off the line with James Ramm getting the drop on Tom and leading into Abbey corner, Tom having to defend from Tom Lenthall’s XJS who was looking down the inside. With Lenthall in Tom’s mirrors Ramm opened a small lead. The XJR6 settled on lap two Tom began to make inroads and closed on the XJS ahead. Lap three and with strong pace down the Hanger Straight Tom was now on Ramm’s bumper and took a cheeky look around the outside at Stowe.

In 1993 the year Tom was born, Alain Prost won the British Grand Prix at Silverstone and what came next was a leaf out of the ‘Professors’ book. With a great drive out of Stowe Tom had momentum going into Vale and late on the brakes Tom pulled off the overtake of his racing career around the outside of Ramm’s XJS. The move proved to be decisive and despite close attention and having to defend at times Tom closed out the race win with consistently quick laps times beating the Essex driver to the chequered flag by less than a second.

The one unsolved puzzle with the XJR6 is how to get that power down and off the line quickly. Race two and that proved still to be the only issue with the car as Tom struggled for grip from the outside pole position and was relegated to fifth going into Abbey corner. The XJR6 however was strong in the second sector all weekend and Tom quicky clawed his way back to second by Stowe and set about closing on Ramm’s XJS with a JEC lap record on lap two. The green and white livered XJR6 was flying. It didn’t take long and by lap three the Tom got the drag down Hanger Straight and took the lead going into Stowe.

Establishing a gap of around two seconds over subsequent laps it looked as if this would be a more comfortable race win for the Swallows team, however a combination of quick lap ten by Ramm and Tom tangling with a lapped back marker it brought the XJS back into play. Forced to defend on the closing two laps the improved handling of the car proved valuable, and Tom crossed the line for the double by just three tenths of a second.

A weekend of highs with Tom’s, pole, two wins and lap record were contrasted with the low of Matthew’s debut. Such are the hands the racing Gods deal you and lessons that motorsport history teaches you. One thing is for certain Swallows created a little bit of their own racing history this weekend. 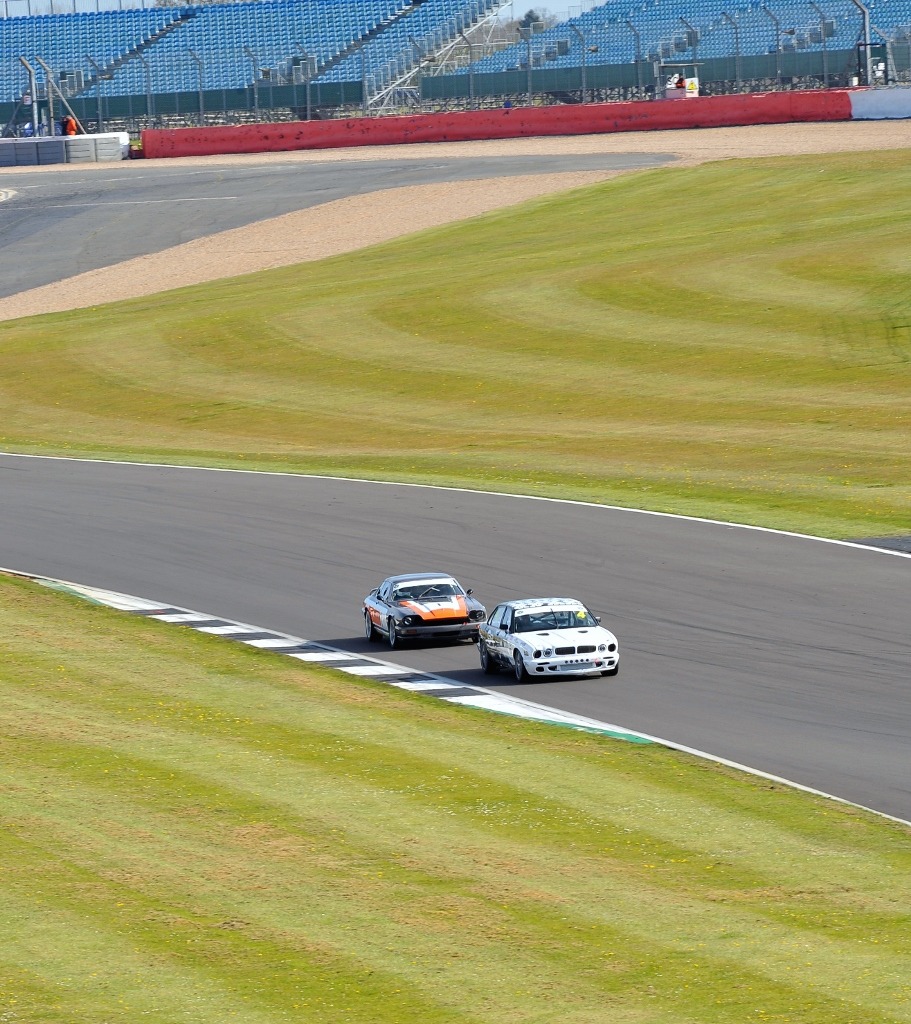